Spring has sprung in the garden at home although judging by the photo I took yesterday of one of the pots in the garden only just,  but it doesn’t matter I am really excited anyway.

I love this time of year, its definitely one of my favourites, I love all the seasons really each one has its own beauty but I struggle with the bit in between Boxing day and the end of February.  By mid February I am desperate for sunshine and contemplating light therapy, I should really start booking a holiday in the Sun for the first two months of the year.   It is lovely (and a little relief) to see the early changes that signify the start of Spring, it really is.

This weekend I had to transplant all the seedlings from the propagators into bigger pots, they have grown so much and I only planted the seeds a few weeks ago.  Its too cold to put them outside and so they are currently residing in my kitchen, all 36 of them.  I didn’t think I would be that successful at growing from seeds as I didn’t really know what I was doing.  I though I would just have a go and see what would happen,  so I planted a few extra just in case  and now I have a mini park growing in the kitchen.  Anyway, whilst I was repotting I was having a think about what I would write about this week and I thought about sharing with you some of the things I have done with my life.

I think I may have said before that having being someone who has packed so much into thirty odd years that sometimes I feel  like I have lived a few lifetimes.  I am not so sure what makes me so driven, maybe I am just made that way, I have one of those brains that rarely switches off  unless I make it.  Maybe it is because I have witnessed the very best of life and the very worst, I have seen people die before their time, when really they should have had their whole lives ahead of them.  I have seen people who have everything and others that have nothing.   I have seen people exhilaratingly happy and  others on the brink of despair with little hope.  I think it’s that fragility of life that drives me the most, we just never know when our circumstances will change or for one reason or another are stopped from doing the things we want to do.  I want to do everything, I have experienced so much but there is so much more to do, I know I am lucky to be alive and how lucky I am to be able to live life.  As humans we are capable of so much we sometimes fail to tap into that potential,  we spend far too much time focusing on the “can’t do’s, instead of the  can do’s,”  I know we do as I have been so guilty of this and I have also seen others do exactly the same, what a waste.  How do we know we can’t do something unless we at least try.

My life has definitely taken the path of the less well travelled, its mostly been amazing but sometimes, (as life can be) quite hard especially when the path being followed is not quite like anyone elses.  The uniqueness of that path has occassionally  left me a little isolated and for that reason I had a weird perception that life had been quite mundane and uneventful.  Last year I was doing a Reiki course and as part of the work I was doing on myself  I decided to map out all the things that I had done over the past 15 years.  I mapped out all of my experiences, you know like the places I had seen, projects I had been involved in, qualifications, they were the things that held real significance for me.  I love colour and I decided that I was going to make the mapping exercise as colourful as possible.  Well, I started it but never finished it  because after 3 weeks I had had enough of myself, I can’t believe I had done so much….

The four pieces of card below are each 60cm x 50cm approx, maybe a little bigger and contain all the things that I have done, there is a fifth piece  but it isn’t finished but I had had enough and I reckon I also had enough to finish it and start a new one.  My perception changed immediately and I could see that I had actually lived a very positive, colourful and full life and one to be proud of at that… 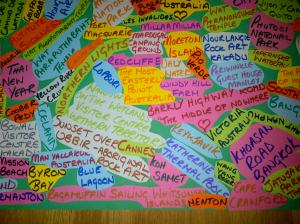 “……Every second that you spend on doubting your worth, every moment that you use to criticize yourself; is a second of your life wasted, is a moment of your life thrown away. It’s not like you have forever, so don’t waste any of your seconds, don’t throw even one of your moments away…” C.Joybell

2 thoughts on “All the things I have done”